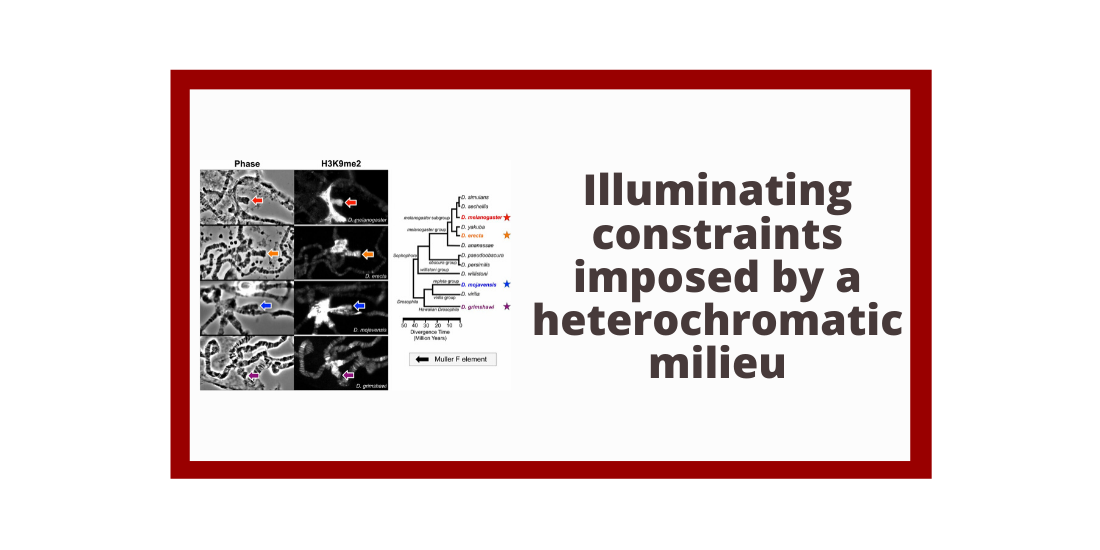 Abstract: The Muller F element (4.2 Mb, ~80 protein-coding genes) is an unusual autosome of Drosophila melanogaster; it is mostly heterochromatic with a low recombination rate. To investigate how these properties impact the evolution of repeats and genes, we manually improved the sequence and annotated the genes on the D. erecta, D. mojavensis, and D. grimshawi F elements and euchromatic domains from the Muller D element. We find that F elements have greater transposon density (25–50%) than euchromatic reference regions (3–11%). Among the F elements, D. grimshawi has the lowest transposon density (particularly DINE-1: 2% vs. 11–27%). F element genes have larger coding spans, more coding exons, larger introns, and lower codon bias. Comparison of the Effective Number of Codons with the Codon Adaptation Index shows that, in contrast to the other species, codon bias in D. grimshawi F element genes can be attributed primarily to selection instead of mutational biases, suggesting that density and types of transposons affect the degree of local heterochromatin formation. F element genes have lower estimated DNA melting temperatures than D element genes, potentially facilitating transcription through heterochromatin. Most F element genes (~90%) have remained on that element, but the F element has smaller syntenic blocks than genome averages (3.4–3.6 vs. 8.4–8.8 genes per block), indicating greater rates of inversion despite lower rates of recombination. Overall, the F element has maintained characteristics that are distinct from other autosomes in the Drosophila lineage, illuminating the constraints imposed by a heterochromatic milieu.

• The improved sequences and gene annotations are available as part of the supplemental materials for the manuscript.

• The genome browsers for D. erecta, D. mojavensis, and D. grimshawi are available on the GEP UCSC Genome Browser.

• The underlying database and additional data files are available for download through the WUSTL Digital Research Materials Repository.

Publication in the News