The following information was cultivated from students’ Frequently Asked Questions (FAQs) about the general processes and key ideas for eukaryotic gene annotation. Special thanks to GEP TA D’Andrew Harrington (College of Southern Nevada) for creating the original version of this living document.

My tracks have a lot of in-frame stops, and the first CDS is missing a start codon. What’s going on?

If you bump into a situation where your gene annotation contains many in-frame stop codons or even if your initial CDS doesn’t appear to have a start Methionine, more than likely, you are examining your gene in the wrong orientation.

We see CDS1 and CDS 2 in the incorrect orientation. Can you spot the problems with this reading?

Notice in the picture above of CDS1 and CDS 2, we see two crucial errors in our reading:

We do not see a start Methionine (ATG) in CDS1.

Each frame in CDS2 has multiple in-frame stop codons.

We see CDS1 and CDS2 in the reverse orientation. Can you spot why this is correct as compared to the above figure?

What tracks should I be using most frequently?

It depends. Tracks have been designed within the GEP UCSC Genome Browser based on the kind of research being done. It is essential to ask the question, “What information am I looking for that the Genome Browser can provide to me?” Examples could be RNA-Seq data, in-frame stop codons, comparative genomics across a genus, or many other things. In general, though, we recommend selecting your “Default Tracks” to get started. Aside from this, we have several other tracks that will stand out during your annotation work, see below:

How do I remember what position my nucleotide is in?

At first glance, it can be challenging to know what nucleotide position the GEP UCSC Genome Browser is showing you. A useful method of reading this frame can be found by looking for the pipe, denoted with this “|” symbol. By looking for the number in between each pipe, you can quickly figure out which nucleotide corresponds with the overall scaffold count.

We can see the start of CDS1 and how each position number is enclosed in pipes. We color coded these pipes to have a better look.

It’s difficult to see or read the GEP UCSC Genome Browser, is there a way to adjust this?

Absolutely! You can increase the font size by clicking on “configure” and then selecting a different “text size.” This font size can be adjusted to many different sizes – so pick whichever you find most comfortable. 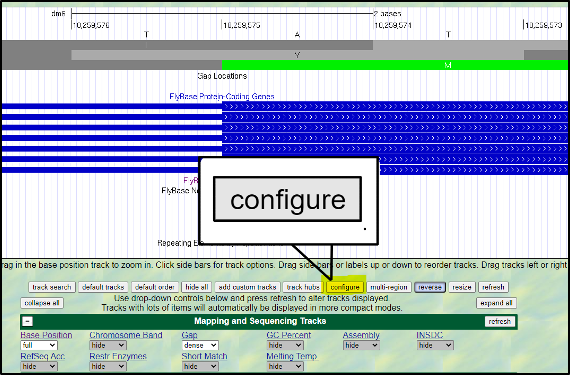 We see the configure button located on the universal ribbon panel.

Underneath configure, we can see numerous different options, including text size.

BLAST, known as the Basic Local Alignment Search Tool, can identify similarities or differences within biological data. It accomplishes this by providing the user an E-value (Expected Value) to determine statistical significance. Explanations of each of the five types of BLAST and their uses can be found below:

Arrows indicate the BLAST program translates the nucleotide sequence before performing the search.

When should I use blastn, blastp, blastx, tblastn, or tblastx?

Each BLAST tool has a different function. You should understand that various tools of BLAST will provide you with different outcomes. If you use the wrong tool, you should expect information that doesn’t make sense and precious time lost. See the table below to see examples of how each tool of BLAST can be used in relation to your time with the GEP. If you ever see results that do not make sense, feel free to reach out to the GEP TA’s, and we will be more than happy to provide more in-depth explanations and assistance with your queries.

Can BLAST search in wide or narrow parameters or databases?

BLAST has three methods for the GEP to understand a target species and our reference species D. melanogaster. Instead of searching broad areas (all NCBI genomes) that may have no information pertaining to your query, BLAST can also be used for more narrow searches such as for Entrez and Assembly searches. It is easy to understand these different search queries as an overlapping funnel that varies based on what you are searching for with BLAST. The figures below show each query type and how they relate to the search results. 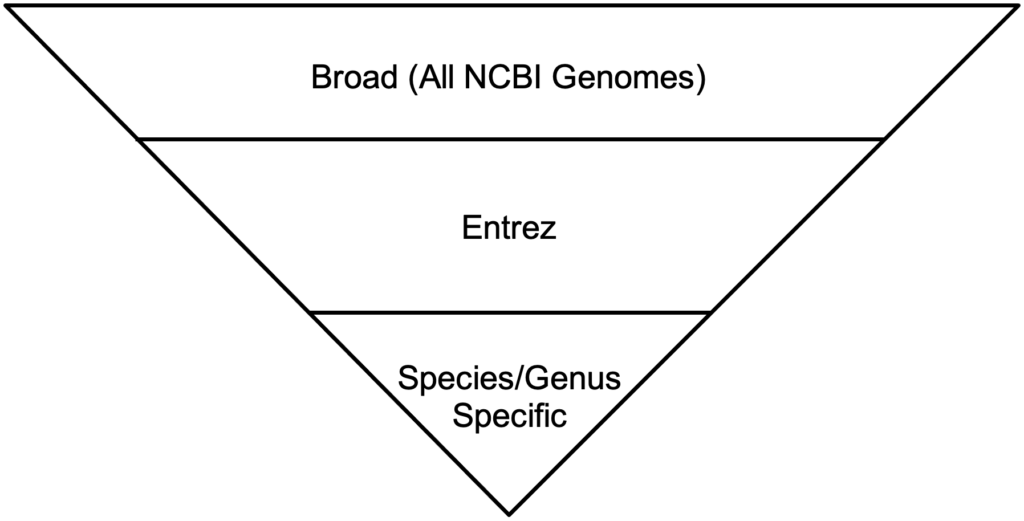 An inverted pyramid showing each search type can be considered a subset of the prior. Notice the overall size change is based on your search area. 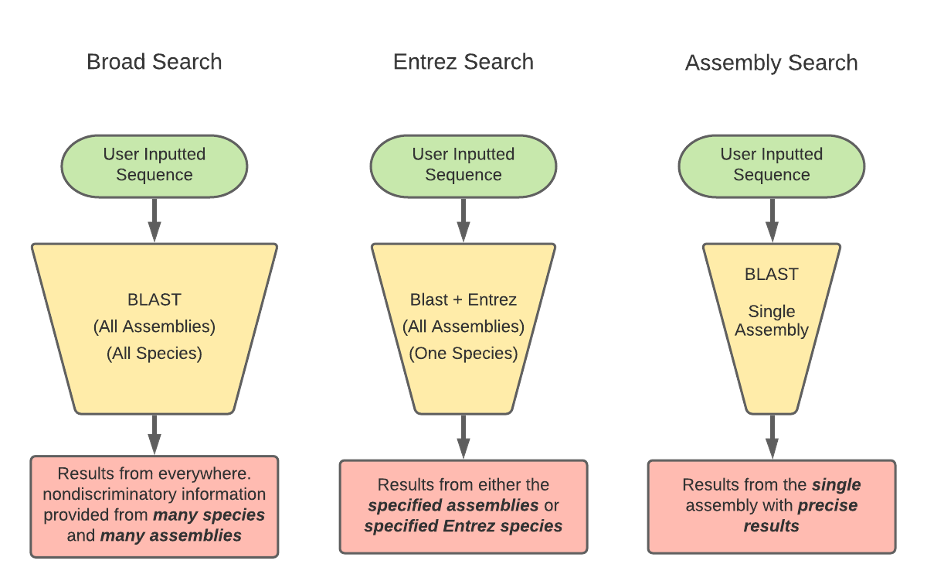 The differences between Broad (All NCBI), Entrez, and Assembly searches can best be seen like funnels.

How do I read the BLAST results page?

Reading the BLAST results page can be daunting at first. Be sure to anchor yourself to your initial scientific question so you don’t get lost. For a detailed breakdown of reading BLAST results, refer to the GEP Tools | NCBI BLAST video tutorial. Below is an example of a BLAST results page and a legend with specific explanations for how to interpret the page. 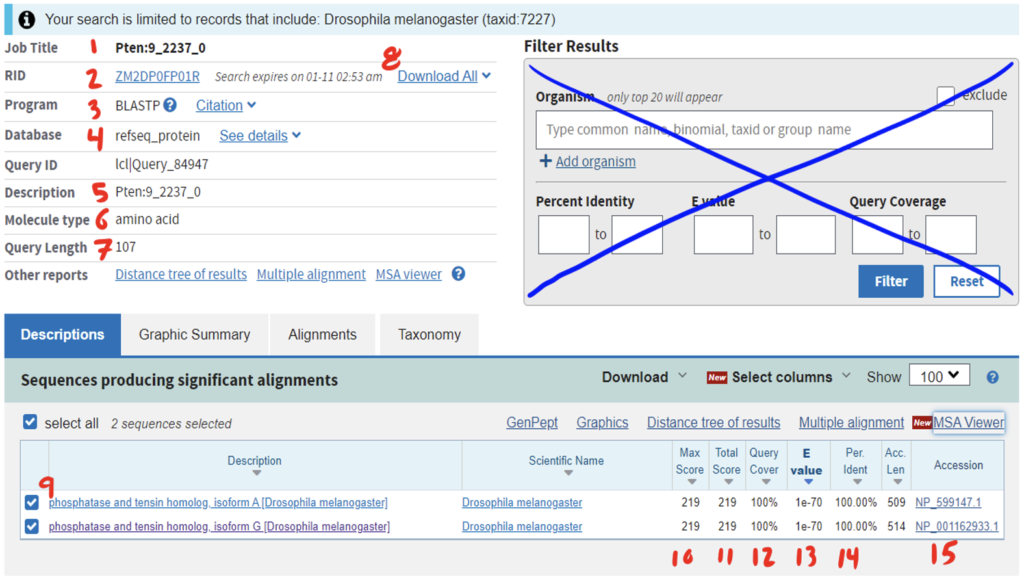 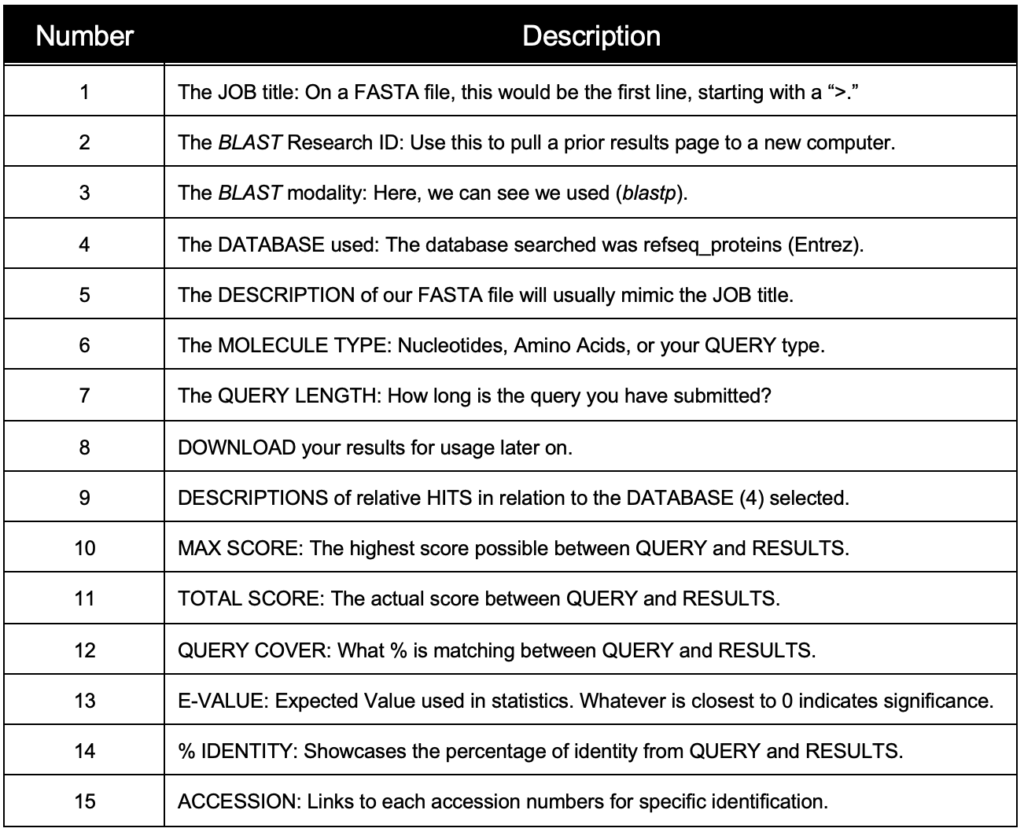 I found the RefSeq Protein, but how do I use BLAST with it?

The RefSeq protein track found in the GEP UCSC Genome Browser is linked to RefSeq: NCBI Reference Sequence Database. When given a REFSEQ protein track, we need to ask the questions, “What is the predicted function of this gene?” and “Does this predictive function match what is found in D. melanogaster?” This, in turn, will give us a better scope of if we have located our target D. melanogaster homolog.

With a peptide sequence or even the Protein ID, we will need to use blastp. The tricky part of searching for a predictive function is that we don’t want to search for everything since this will take far too long and render many useless results. Consider the following questions:

Assuming the answers to our questions above are “blastp” and “within the genus,” we can run this report by calling on an Entrez search with D. melanogaster (taxid: 2772).

In the Database drop-down menu, be sure you are selecting the correct database—“Reference proteins.” Notice that “refseq_protein” is shorthand for this database. 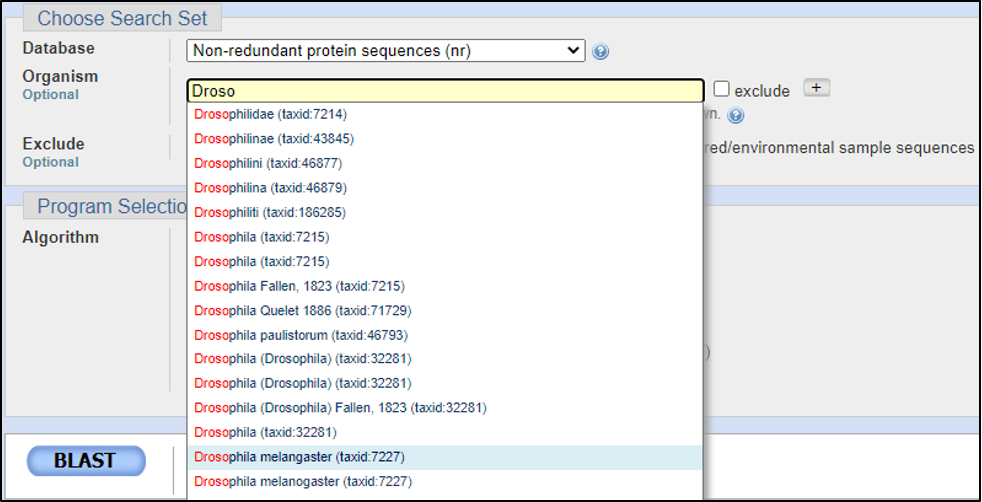 Typically, you’ll search with the reference species in the Organism field set to “Drosophila melanogaster.”

BLAST returns “No Significant Similarities Found” - Is this right?

BLAST relies on statistical analysis to determine areas between inputs and databases to produce statistically significant results. Sometimes when inputting a specific coding DNA sequence (CDS) or query, it is possible that BLAST will not warrant any results. This can happen for numerous reasons, three of the most common are listed below:

Is BLAST ultimately significant and do I need to use it?

The short answer is yes, BLAST is essential. Many computational biologists, geneticists, and numerous other scientists use BLAST day-to-day for complex calculations and analysis. Without BLAST, we would not be able to accomplish most of what is done during Bioinformatic analysis. Could you imagine having to calculate these E-values and Alignments by hand? It isn’t fun. Remember that BLAST is a tool, and like all tools across industries, it is better to stay ahead of the curve and be confident in your ability to use this widely demanded tool.

An e-value, also known as an expected value, is a value provided by BLAST to denote expected random chance when searching the database with your query sequence. The closer your e-value to zero, the less noise we expect to see and the more “significant” our match becomes. Just because we get an e-value of 0.0, doesn’t mean it is perfect though. Let’s examine two situations where an e-value would be 0.0 for different reasons:

My results are taking several hours to finish, is this normal?
BLAST results within the GEP should not take several hours. Based on our query sizes, you should expect search times of between seconds to several minutes only. If you are getting search times of several hours, we have a few suggestions for this:
For more information on troubleshooting your BLAST results and why these results may be taking so long, feel free to reach out to any of the GEP Virtual TAs or see NCBI’s troubleshooting page.

I’m finding many genes in my contig that aren’t in D. melanogaster. Is this normal?

You may find genes in the contig of your target species that do not match what you expect. This is normal and requires some investigating of your contig to ensure you’re reading the results accurately.

I am finding either low RNA-Seq data paired with High Predictions in BLAST - or the opposite; Why is this happening?

When looking at a contig and you are running an instance where a predicted gene is coming back with either: a) low RNA-Seq with high BLAST predictions or b) high RNA-Seq with low BLAST predictions. This can occur with what’s known as a pseudogene, however, it is incredibly rare. It can also occur when the region we are annotating is a repeating sequence elsewhere in the genome; the RNA-Seq might have misaligned at an incorrect location.

What information should I keep handy?

In the Pathways Project, you will need to keep critical pieces of information on standby. There will be times where you will not finish an annotation or will need to navigate through multiple tabs at any given time. Document the following for quicker navigation:

Why can I not locate my target gene in the Gene Record Finder?

The Gene Record Finder uses FlyBase to collect the most pertinent information you will need during your time annotating your target gene. Because of how this webpage interacts with the FlyBase records, you must type the target gene symbol precisely as indicated, as they are case-sensitive. Even if one capital letter, one dash, or even a single character isn’t exactly as it is found on FlyBase, you might get an error that looks like the figure below:

While pten is a real gene, the correct entry would be “Pten” not “pten,” otherwise you’ll see the error message above.