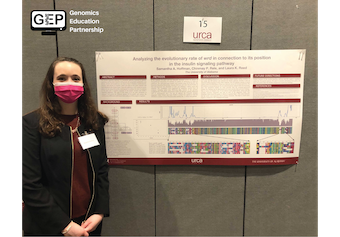 Six GEP students (mentored by Dr. Laura Reed) presented at URCA 2021 one of which, Samantha Hoffman, won 1st place in her division.

Abstract: The insulin signaling pathway is a metabolic pathway involved in glucose regulation and has been linked to cell growth, fat and protein metabolism, and disease. Insulin and its pathways can lead to Type II Diabetes, Cardiovascular Disease, and cancers in humans, which are some of the most common and fatal diseases in the United States. Since this pathway is well conserved across phyla, we are using Drosophila melanogaster to analyze the rate of evolution in the gene wrd, a negative regulator of the insulin receptor and TORC1 signaling pathways. The goal of this study is to use gene annotation to compare wrd across six different species of Drosophila and analyze the evolutionary differences and conservation patterns of this negative regulator.

PrevPreviousCareers in Genomics:
Genetic Counseling
Next2021 STEM for All Video ShowcaseNext