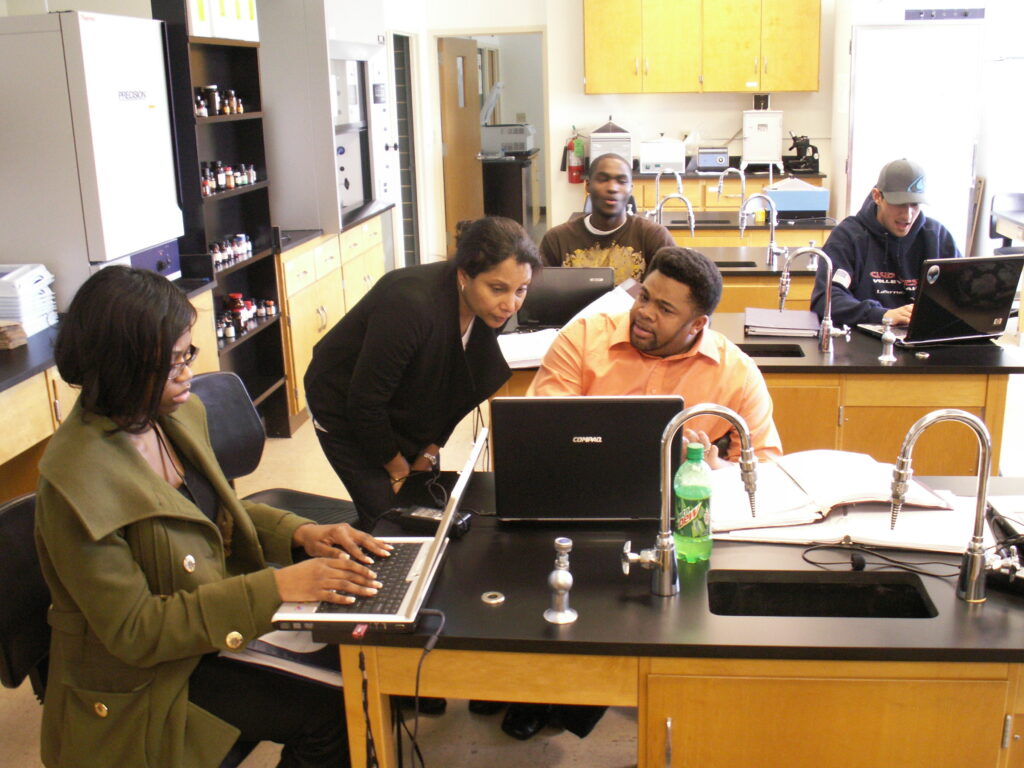 The following article was written by Sara Woelfel and it first appeared in Stritch Magazine (now Stritch News). We would like to thank Ms. Kathleen G. Hohl and Dr. Nighat P. Kokan at Cardinal Stritch University for granting permission to reprint this article on the GEP website.

Genetics BL308 is not listed in the Stritch academic catalog as a language course, but perhaps it should be.

After taking the semester-long class, students find themselves able to use words like Drosophila grimshawi, Drosophila melanogaster, orthologs, contigs, and exons with ease as they immerse themselves in genomics, the study of the intricate biological and genetic information that uniquely identifies living organisms.

Students not only learn about genomics, but also participate in original research thanks to Stritch’s membership in the Genomics Education Partnership, a consortium of more than 100 U.S. colleges and universities providing opportunities for undergraduates to contribute to genomics research. Created by Dr. Sarah Elgin of Washington University in St. Louis in 2006, the partnership is made possible through sponsorships by the University of Alabama, Washington University, the National Science Foundation (NSF) and the National Institutes of Health (NIH). Stritch was the first Wisconsin school to join the partnership in 2008, and is one of only three Wisconsin schools currently participating in the research.

“Our students are better equipped when they are cognizant of cutting-edge tools and have the knowledge and ability to carry out this type of computational analysis,” said Dr. Nighat Kokan, associate professor of biology who is a member of the Genomics Education Partnership and guides the students in their genomics research with the support of Stritch’s Natural Sciences department.

Stritch senior Jose Lizarraga Mazaba said he appreciated that Kokan provided this type of research experience at the undergraduate level. As he prepares for the rigors of medical school in 2021, Lizarraga Mazaba said the work differed from his previous science classes, requiring persistence to learn the annotation process and finish his individual project, especially as the class transitioned from in-person to online during the spring 2020 semester.

Throughout the semester, students familiarize themselves with genomic concepts and databases before they plunge into genome annotations, in which they analyze and identify genes on contigs – which are derived or constructed from a set of overlapping DNA segments during sequencing – assigned specifically to them and one other undergraduate within the national network. Students then submit their final results to the Genomics Education Partnership, where the findings eventually may be added to a database accessed by scientists nationwide doing genetics research. Ultimately, the students may be listed as co-authors in research publications.

“Each student worked to complete their own annotation project and was assigned their own segment of the Drosophila genome to annotate,” said 2020 graduate Meggie Griffin, a math major and biology minor. “Annotation involved identifying coding sequences within the DNA by leveraging several databases and software tools that identified likely candidates for coordinates, and then finding the exact coordinates of the coding sequence by manually reviewing the DNA sequence. A project was complete once the exact coordinates for all of the coding sequences within the project’s DNA segment were found and passed a verification model.”

“There are actually a dozen different species of drosophilae (fruit flies) whose genomes have been sequenced,” Kokan said. “The available sequence data makes it possible to teach and make the most of undergraduate students who use gene conservation and computational evidence to annotate (a highly labor intensive process) the DNA sequences.”

Kokan said the process can be challenging and frustrating for students, especially when they are new to the concept of real research, which is full of unknowns. Lizarraga Mazaba said he struggled with the demands and particulars of the research process at first, but felt immense satisfaction not only at finishing his individual project but also with helping fellow students complete theirs.

“Sometimes the answer is not there at the end of the day,” Kokan said. “That’s how life is, too. It’s a real-life situation because they don’t have all the answers, so you have to look at all the evidence that is there and make the best call.”

Griffin said the annotation process played to her strengths, since it required a high level of focus and attention to detail during the global pandemic when all learning was virtual.

“I think that the annotation project was a great opportunity for me, as someone interested in the data side of science, but is also a great way to expose the more clinically or lab-focused biology students to the new kinds of big data research being done in genetics,” said Griffin, who plans to pursue a master’s degree in biomedical data science at University of Wisconsin-Madison in preparation for a career in analyzing population health data.

Genetics BL308 is offered every Spring semester as an upper-level course for science majors and minors. This research experience is one component of Stritch’s rigorous science offerings and programs that position students like Lizarraga Mazaba and Griffin for immediate employment in science fields or for advanced or professional degrees.